A stroll down the showroom floor at the Embedded Systems Conference always subjects you to so much variety. There are some vendors, like Microchip, Motorola, and Texas Instruments, that always promises to be informative and entertaining. The smaller booths, however, tend often become be a question of indecision as to whether or not you should stop by - sometimes its not obvious that the vendor has anything you may be interested in. 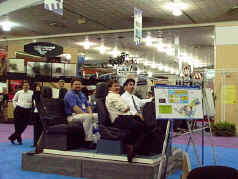 ST-Microelectronics had the best real-world demo of the big-name vendors. The interior of a Jeep Grand Cherokee dominated the central space of their booth. While some car companies, such as GM, already have GPS navigation capabilities in their high-end vehicles, and while some semiconductor vendors will gladly tell you about their car multimedia system strategies, ST has married full-on Navigation and Speech Recognition with a GSM digital cellular interface. The L&H voice recognition system for the navigation and for dialing the cell phone appeared to be speaker independent for all comers, and only experienced difficulty when Godzilla was playing too loud in the back seats. No, I'm not talking about precious little ones, I'm talking about a DVD of the 1998 film "Godzilla" playing on the two Sharp color LCD displays that were in the back of the headrests of the two front seats, with audio coming from the surrounding Bose® speakers.. The LCD displays also had full internet access (ST people spotted a guy checking his email from the back seat) and could also play music DVDs. At one point, the Bee Gees were heard above the din of the Conference, and it was quite a sight to see exhibitors in the surrounding booths moving to the beat (NOTE: THIS SHOULD NOT BE TAKEN AS AN ENDORSEMENT BY THE EDITORS MICROCONTROLLER.COM OF THE BEE GEES!)

Microcontroller.com's Coolest Booth Award
But of all the booths there, there was one that I have to point out qualifies as the Coolest Booth. If you were locked on the conference floor overnight, this is the booth that you would spend most of your time at - its the one where you would play with all the demos and just experiment all night. 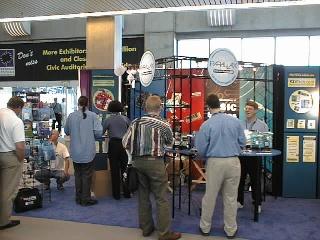 The award easily goes to the Parallax Booth. Parallax makes the Basic Stamp microcontroller project board, which allows you to program Scenix SX and Microchip PIC microcontrollers using the Basic programming language. The products are very popular in small, single threaded, quick time-to-market applications. Parallax had samples of all of their project boards which are in the form of the stuff we all like to play with - robot projects, a weather station, educational boards, lots of cool stuff. The booth was always busy; everywhere you turned, people was playing with something. But most important, most of the projects were educational, something that is sorely lacking in this industry. They teach principles of robotics, data acquisition, motor control,  and others.

The Word from the Showroom Floor
Lots of seat-of-the-pants marketing goes on at the Embedded Systems Conference. One thing that was immediately obvious: the semiconductor and 3rd party marketplaces have adapted and embraced the internet rapidly. Datasheets and product literature are readily available from the web sites of most vendors. Samples and datasheets can be ordered online. But while this is certainly a boon the working engineer, in the long run some products will suffer. Without the personal interaction with a sales person or support technician, vendors can easily lose touch with the marketplace and miss market trends or, even worse, the embedded market may evolve more slowly as conventional marketing becomes more difficult. None of this appears to be a challenge to Microchip - I spent a fruitful half-hour with Ron Cates, their product marketing manager, and Eric Sells, Public Relations manager for Microchip. The reason for Microchip's success is that they know their target market engineers so well, they probably know our favorite pizza toppings, a marketing advantage well understood by the most popular 8-bit microcontroller supplier, Motorola (Note: while I did speak with Mot at the conference, we did not discuss pizza).

But the internet has really sifted out the good from the bad in the embedded marketplace. The difficulty of separating the good vendors from the bad vendors is less of a mystery now. Public & private web sites, news groups, and email have made it impossible for vendors with troubled products to keep their problems unknown, while the praises of quality vendors are well broadcast to the internet community. The result: No More Secrets.

Next installment - Why are we Embedded the Web Again? plus Trends in Development Tools