Jazz Semiconductor Aquired by Acquicor in an Unusual Transaction 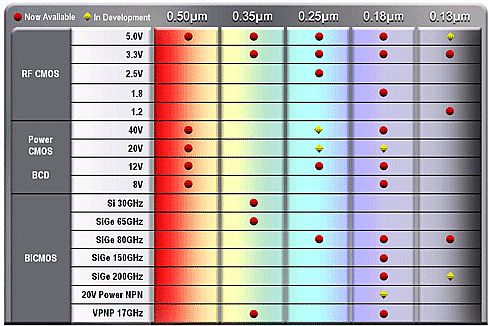 Jazz Semiconductor has been losing money for the past three years. In the first half of 2006, Jazz Semiconductor had reported revenue of $116M and losses of $15.5M. Jazz had attempted to go public in 2004 but withdrew, citing poor market conditions. Jazz had announced another attempt at an IPO in April 2006 but has cancelled with the Acquicor acquisition. Jazz's liability seems to be it's location in Newport Beach where cost of labor and real estate are prohibitively expensive.

Jazz Semiconductor was previously the wafer fab for Conexant Systems until Conexant sold 55% of the company to he Carlyle Group in 2002 for $50M. Jazz's customers include Skyworks Solutions, RF Micro Devices, Texas Instruments and Freescale Semiconductor. If some of these names are familiar, keep reading.

Since spinning off Jazz, Conexant and Skyworks have had agreements with Jazz whereby they essentially purchased wafers at a fixed price. The agreement with Conexant terminated in June 2006, and as a result Conexant is expected to do less business with Jazz. The agreement with Skyworks ends in March 2007. According to Jazz Semiconductor statements filed with the SEC, Conexant Systems, Inc. and Skyworks Solutions, Inc. jointly have comprised about 60% of Jazz's revenues. Clearly, Jazz will need to gain new and significant customers within the next year.

Acquicor is a "blank check" company founded by Gil Amelio, Ellen Hancock and Steve Wozniak. Based in Newport Beach, California, and founded in August 2005, Acquicor is run by Amelio as chairman and CEO. Hancock as the COO, while Wozniak was named the CTO. All three appear to have profited handsomely from Acquicor. Acquicor's prospectus described its focus: "Our efforts in identifying prospective target businesses will not be limited to a particular industry, although we intend to focus on the technology, multimedia and networking sectors."

Dr. Gil Amelio
Dr. Gil Amelio, who holds over 16 patents, was President of Rockwell Semiconductor Products Division (SPD) from 1983 to 1988 (Rockwell SPD later became Conexant Systems,  which later became Jazz, so, in a way, Dr. Amelio just bought his old company back). He later became CEO of National Semiconductor from May 1991 to February 1996. When Dr. Amelio took over, National was a record $161M in the red, it's worst loss in National's 30-year history.  Three years later, under Dr. Amelio's guidance National reported earnings of $264M on $2.3B in sales. Dr. Amelio resigned from National to become CEO of Apple. According to The Street, his involvement with Acquicor has already made Amelio a paper profit of $30M.

Kevin Maney at USAToday has a fascinating perspective on the acquisition in his Interview with Gil Amelio.

Prexient Micro Devices ?
Dr. Amelio is also President and CEO of Prexient Micro Devices, a mysterious fabless semiconductor company based in Newport Beach with an address of incorporation identical to that of Acquicor. Dr. Amelio founded Prexient in 2003 while still CEO of National Semiconductor. Oddly enough, Prexient Micro Devices has no website and their products are as mysterious as the company. A phone call to Prexient's listed number at (408) 866-4480 gave some very strange results: the woman who answered the phone seemed nervous and did not know anything about the company; when I identified myself as Press, she gave a short cry and hung up. I immediately called Prexient again and asked to speak to someone in charge - I was transferred to a man who gave his name as C.S. Woo who exclaimed, "We are a secret company. We don't want to talk about.". When I asked about Prexient's products, he hung up.

Steve Wozniak
Steve Wozniak has no direct experience in the semiconductor industry. He is best known for founding Apple Computer with Steve Jobs. Wozniak is very aggressive when it comes to marketing. Steve's previous company, Wheels of Zeus, was formed in 2002 and sought to manufacture cost-efficient GPS modules. Zeus closed it's doors in in 2006 due to competitive market pressures.

Ellen Hancock
Ellen Hancock was Executive Vice President and COO of National Semiconductor from September 1995 to May 1996 where she worked with Dr. Amelio to shape National's strategy to profitability. During that time she demonstrated an extensive knowledge of the microcontroller marketplace and contributed to the development of the CompactRISC roadmap, a forerunner of the ARM7 architecture (editor's note: I was Product Marketing Manager of the CompactRISC group at that time).

The Future of Jazz Semiconductor
According to Gil Amelio, "over time we expect to be acquiring additional FAB capacity of our own and so that will be one of the things we're going to be looking for after the deal is done."

Acquicor bought Jazz Semiconductor from owners Conexant Systems, which owned 45% of Jazz, and The Carlyle Group of Washington, who owned 55%.

This is where things get even more interesting, because The Carlyle Group is part of the same group of investors that recently announced they are purchasing Freescale Semiconductor. It was my analysis that The Blackstone Group might have Freescale sell off their East Kilbride RF and mixed signal fab (and associated RF business)  to finance the acquisition. And now, The Carlyle Group, one of the organizations associated with the Freescale acquisition, has sold off Jazz Semiconductor, an RF and mixed signal wafer fab.

This appears to be more than that of a play in the Semiconductor industry - it is also an aggressive financial transaction as Acquicor sets themselves up to enter the foundry business.

Jazz Semiconductor Aquired by Acquicor in an Unusual Transaction

This Article has been seen 32434 times