The Atmel Cortex M3 runs at 96MHz and has a lot of very high speed peripherals, including 480Mbps USB 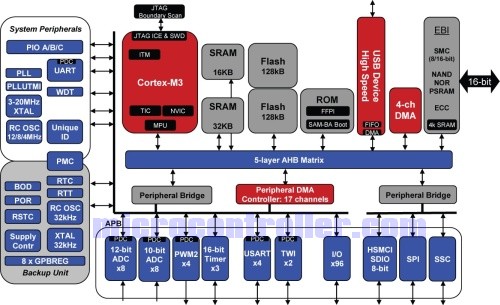 Features of the new Atmel Cortex M3 include:

The separation of the flash into two blocks allows one block to be programmed while the other block is executing code. The Atmel Cortex can be programmed to execute out of either bank at next reboot.

While the Atmel Cortex M3 and the ARM7 share the same hardware abstraction layers along with common peripherals, ARM7 code needs to be recompiled for the Cortex M3.

480Mb/sec USB is not common in today's microcontrollers because of the challenges involved in moving around so much data so quickly. The new Atmel Cortex M3 has solved those challenges by the implementation of a high-speed architecture that seems specifically designed to support the movement of so much data. Atmel's SAM3U USB supports up to seven endpoints and interfaces to a 4K-byte Dual Port RAM. Endpoint types support Bulk, Interrupt, Isochronous, and Control endpoints.

This Article has been seen 21984 times