Atmel SAM3S microcontrollers draw a mere 1.45mW/MHz and boast lots of peripherals. Sam I Am?

The new Atmel SAM3S family includes 18 new Flash microcontrollers and run at a top speed of 64MHz. A 128-bit wide internal Flash memory interface allows most linear code to run with zero wait states. The Atmel SAM3S is also the only known ARM Cortex-M3 to run at only 1.62V.

The Atmel SAM3S is a General Purpose microcontroller family, It succeeds the Atmel SAM3U. 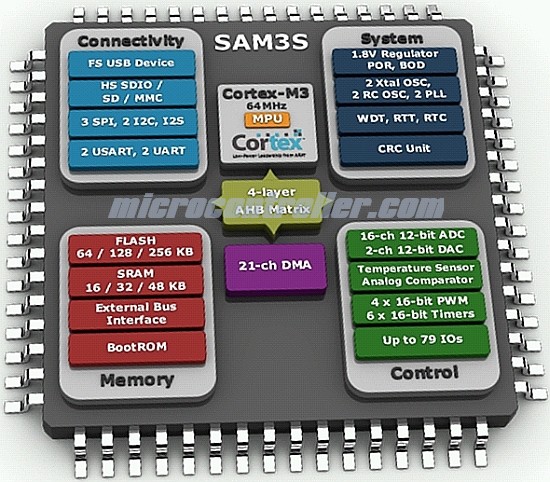 The Parallel IO Capture Mode on the Atmel SAM3S allow easy connections to devices with non-standard parallel interfaces, such as low-cost sensors. The user can custom-program the behavior of the PIO clock and control signals. Captured data is  transferred to memory via a peripheral DMA. In most situation,s the Atmel SAM3S peripheral DMA is non-intrusive and does not steal cycles. 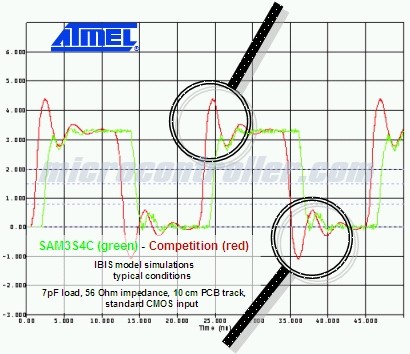 Atmel SAM3S Power Savings
At a 10MHz clock speed or lower, when not performing a Flash read operation, the memory interface of the Atmel SAM3S shuts down the sense amplifiers of the Flash memory array. In addition, on-chip is a self-adapting regulator that helps prevent current spikes and lowers the average current draw. Along with other power-saving enhancements, this allows the Atmel SAM3S to require a mere 2.3mW at 1MHz. When running at very low speeds, the SAM3S power draw is only 1.3mW at 500kHz.

Atmel SAM3S Availability and Pricing
The Atmel SAM3S will be available for sampling 1Q2010 and for production 2Q2010. Pricing ranges from $2.50 USD to $4.45 USD in quantities of 10k units.

This Article has been seen 15538 times