Atmel SAMA5D3 has Lots of Power and Linux Development

Atmel_SAMA5D3 with lots of Power, free Android 4.0, and LOOK - it even plays Minesweeper! Demo board makes a nice Linux trainer, too. 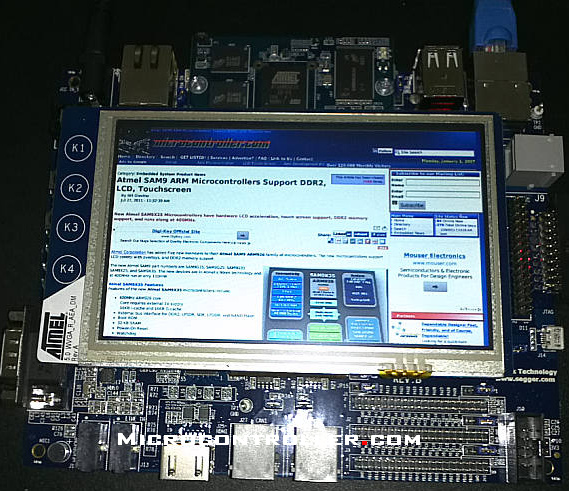 Atmel SAMA5D3 Eval Board browsing the best of the internet
The demo and evaluation board, pictured here, is based on embedded Linux and can also be used as a Linux trainer. The board includes a home automation demo and also plays a smooth game of Minesweeper. A kit comes with Linux demonstration software and a graphical user interface (GUI) based on the Qt. the Qt SDK makes it easy for anyone to build attractive GUIs and comes with wdigets, demos, documentaion, and training material.

Atmel is making a 12-year lifetime commitment to this device. So use it with confidence.

The SAMA5D3 product embeds one 160-Kbyte internal ROM containing a standard and a secure bootloader. The secure bootloader is described in a separate document, under NDA. The standard bootloader supports booting from the 8-bit NAND Flash with ECC management, SPI Serial Flash, SDCARD, EMMC, or TWI EEPROM. The boot sequence can be selected using the boot order facility (Boot Select Control Register). The internal ROM embeds Galois field tables that are used to compute NandFlash. What all this means is that the SAMA5D3 provides excellent protection against anti-cloning.

Engineers can download free Atmel Linux distributions, and a free Android 4.0 port will be available by March. A C-Compiler is available for non-operating system (OS) use. A wide ecosystem of suppliers provide development tools, OS, protocol stacks, along with system-on-modules and kits.

Availability and Pricing
"The Atmel SAMA5D3 is shipping in a 324-ball BGA package and is in mass production now. Pricing starts below USD $7.00 for 1,000-piece quantities"

Atmel SAMA5D3 has Lots of Power and Linux Development

This Article has been seen 34981 times