This one runs at 120MHz and has crypto, a camera interface, SDIO, USB, Ethernet, and plenty of the peripherals you love. Just in time for Christmas!

Nov 30, 2010 - STMicroelectronics has announced their new high performance STM32 F-2 microcontroller family. Based on the ARM Cortex-M3, The STM32 F-2 runs out of Flash memory at the Cortex-M3's top design speed of 120MHz. 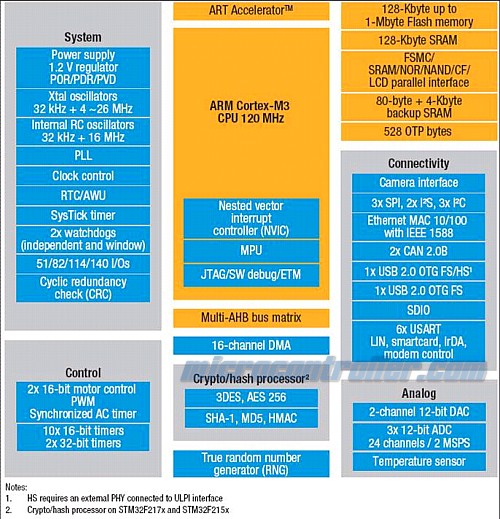 STM32 F-2 Block Diagram
According to STMicroelectronics, STM32 F-2 microcontrollers scream at 150 Dhrystone MIPS while running at 120MHz out of Flash. ST states that CoreMark has benchmarked the F-2 at 188uA/MHz out of Flash, which equals 22.5mA at 120MHz.

The STM32 F-2 also features two USB 2.0 On-the-Go (OTG) ports. USB OTG are slaves, but can also connect to other USB OTG devices. These ports typically connect using those mini-USB ports you see on the side of mobile devices such as GPS units.

The STM32 F-2 is manufactured using ST's 90nm process technology, which allows the core to run at a low 1.2V.

STM32 F-2 ADC
The STM32 F-2 has 3 separate 12-bit Analog to Digital Converter (ADC) modules. These ADC modules share 24 input pins. Every single ADC block can use up to 24 channels. It is up to the Engineer to program the number of channels used by each ADC module. The only condition limiting the use of the ADC channels is that the same input cannot be sampled by more than one ADC at the same time. The total unadjusted error for the STM32 F-2 ADC is ±2 LSB Typical, ±5 LSB Max (Max value is based on characterization and is not tested in production). 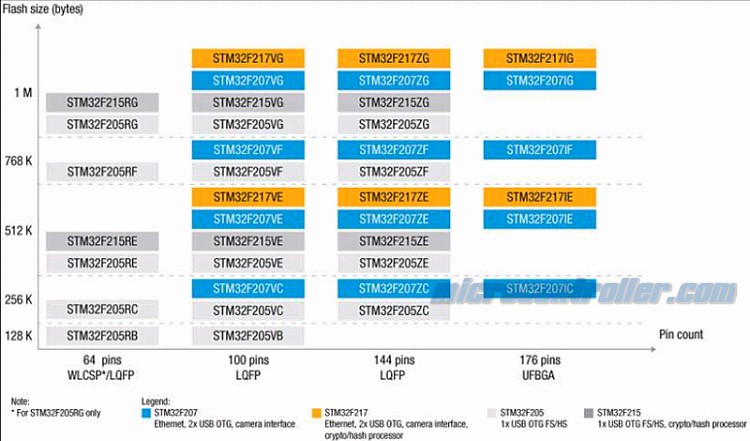 Pricing and Availability
STM32 F-2 microcontroller family samples are available today to OEM customers, with general availability starting in Q1 2011. The $3.18 for the STM32F205RBT6 with 128 Kbytes Flash, 64 Kbytes RAM in LQFP64 package sells for $3.18 at 10Ku.

In Other News
STMicroelectronics will introduce two new Cortex-based microcontroller families in 2011. The first will be a Cortex-M0 microcontrollers, which targets the huge 16-bit microcontroller market. The second will be Cortex-M4 cores which are based on the Cortex-M3 but also include a Multuply ACcummulate unit (MAC) and a Floating Point Unit (FPU).

About STMicroelectronics
"STMicroelectronics is a global leader serving customers across the spectrum of electronics applications with innovative semiconductor solutions. ST aims to be the undisputed leader in multimedia convergence and power applications leveraging its vast array of technologies, design expertise and combination of intellectual property portfolio, strategic partnerships and manufacturing strength. In 2009, the Company's net revenues were $8.51 billion."

This Article has been seen 22395 times