Sprints along at 168MHz. Low power for a Cortex M4. From the company that owns the Cortex market. Really?

According to ARM, STMicroelectronics has a 45% market share of the Cortex M market. 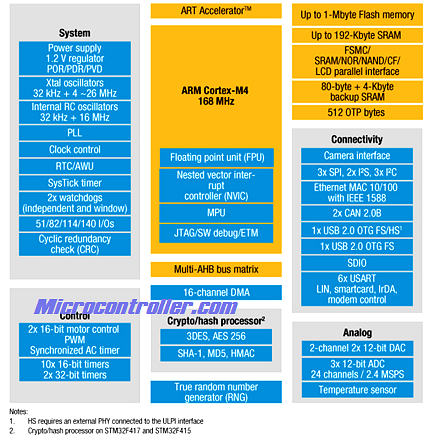 Family features are broken down as follows:

STM32F407 microcontrollers add several peripherals to the STM32F405 features: a second USB OTG interface (full-speed only); an integrated Ethernet MAC 10/100 supporting both MII and RMII, with IEEE1588 Precise Time Protocol v2 Hardware support and an 8- to 14-bit parallel camera interface allowing the connection of a CMOS camera sensor, supporting up to 67.2 Mbytes/s. STM32F407 microcontrollers are available in four packages (LQFP100, LQFP144, LQFP/BGA176), with from 512 Kbytes to 1 Mbyte of Flash.

STM32 F4 Performance
The STM32 F4 can achieve zero-wait states out of flash while running at 168MHz. The STM32 F4 does this with a 128-bit Flash interface that allows the STM32 F4 to access four instructions at a time. Of course, performance hits a slight bump when a branch occurs. The microcontroller also boasts data and branch caches.

Availability and Price
All STM32 F4 microcontrollers are in volume production, with prices beginning from $5.74 for the STM32F407VET6 with 512 Kbytes of Flash and 192 Kbytes RAM in the LQFP100 package, 1K unit quantities.

About STMicroelectronics
STMicroelectronics is a global leader serving customers across the spectrum of electronics applications with innovative semiconductor solutions. ST aims to be the undisputed leader in multimedia convergence and power applications leveraging its vast array of technologies, design expertise and combination of intellectual property portfolio, strategic partnerships and manufacturing strength. In 2010, the Company's net revenues were $10.35 billion

This Article has been seen 19709 times