Look, analog processing on a microcontroller! No, don't be frightened, just watch the nice video.

STMicroelectronics has introduced its new STM32-F3 microcontrollers with an FPU.

STM32 F3 microcontrollers are system-on-chip devices based on the Cortex-M4 core with a Floating Point Unit (FPU), and are optimized for efficient handling and processing of analog signals in systems such as three-phase motor controls, biometrics and industrial sensor outputs or audio filters. The new F3 series extends the scope of ST's STM32 family by allowing designers to tackle mixed-signal control applications.

The new series is positioned between the STM32-F1 and the best-in-performance-class STM32, which features the Cortex-M4 with FPU core and large memory capacity combined with high-speed 168MHz maximum CPU frequency for complex applications. 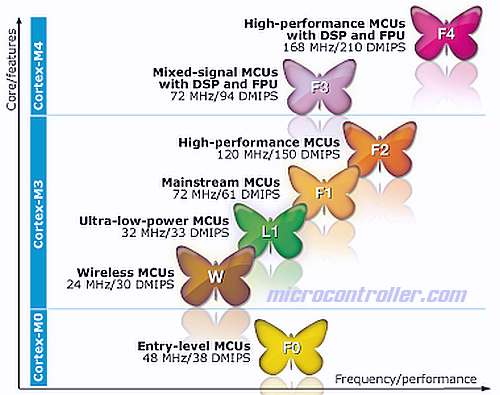 STMicroelectronics STM32 Roadmap with the STM32-F3
With the new F3 microcontrollers, ST's STM32 family now offers more than 350 variants addressing applications from entry-level, price-sensitive designs through to those demanding high performance and rich on-chip features. The new F3 series enables ST to deliver the advantages of its STM32 devices and ecosystem to applications that have formerly required both high-performance analog and an entry-level digital signal controller, such as high-performance motor control or embedded digital audio.

STM32-F3 microcontrollers also incorporate ST's latest improvements to digital peripherals for its STM32 family, which Michel Buffa explains is a further advantage of the extensive compatibility between all ST's ARM Cortex-M microcontrollers.

The STM32 F30x devices feature 8Kbytes of SRAM mapped to the instruction bus as Core Coupled Memory (CCM-SRAM). Critical routines loaded in the 8KB CCM at startup can be completed at full speed with zero wait states, achieving 94 Dhrystone MIPS at 72MHz. This compares with 62 DMIPS when executing from Flash or SRAM; equivalent to a 52% performance increase for critical routines. The STM32 F30x series also has up to 40Kbytes of SRAM mapped on the data bus. The 8K CCM-SRAM can also be used for data storage with no performance trade-off. Devices are pin compatible with the STM32 F1 series, and also share the same API, which simplifies migration to higher performing devices.

The STM32 F37x devices deliver a different blend of peripheral functions.  They are the first microcontrollers from ST to integrate a 16-bit Sigma-Delta ADC on-chip, allowing the STM32 family to solve a wider range of precision-sensing applications and providing a single-chip solution capable of replacing a discrete general-purpose processor and separate ADC. Up to three 16-bit Sigma-Delta ADCs are integrated on-chip, with separate analog supply from 2.2V to 3.6V, up to 21 single or 11 differential channels, and seven programmable gains per channel.

Both series are sampling now, to lead customers, and are scheduled to enter full production in Q3 2012.

About STMicroelectronics
STMicroelectronics is a global leader in the semiconductor market serving customers across the spectrum of sense and power technologies and multimedia convergence applications. From energy management and savings to trust and data security, from healthcare and wellness to smart consumer devices, in the home, car and office, at work and at play. In 2011, the Company's net revenues were $9.73 billion.

This Article has been seen 21672 times