Texas Instruments has agreed to buy National Semiconductor in an all-cash deal for $6.5 Billion. The transaction is expected to close before the end of 2011. After the deal is completed, the new, larger Texas Instruments will show analog components as 1/2 their revenue. Texas Instruments expects to recoup the money put into this deal within only three years. The deal will require regulatory approval in both the USA and Europe. In all, about ten countries must approve the deal.

National claims that it was not looking to be acquired. Texas Instruments was looking to expand their analog portfolio quickly and aggressively, without taking the time to build new products. TI was therefore seeking an acquisition target. National Semiconductor was the best opportunity to expand because of National's size and also non-overlap of TI's existing product lines. However, National Semiconductor's sales have declined since 2006, from $2.16 Billion in FY 2006 to $1.4 Billion FY 2010 (from FY2009 to FY2010, net sales declined 23%)

By the end of the first year, about $100M in redundant operations will be eliminated (layoffs). These will be non-scalable functions such as high-level corporate functions, IT, support, and sales and will most probably be from National Semiconductor's payroll. TI claims that there are no redundant R&D functions.

In the end, like all buyouts of this type, customers will need to see only one brand. Eventually, all of National Semiconductor's products will be labelled Texas Instruments.

Product Lines
National has about 12,000 analog components in their product line, while TI has about 30,000. According to both companies, these product lines do not compete as much as they compliment each other because of different product specs. National, for example, is strong in analog power management, while TI is stronger in analog communications. National has an impressive product line of low cost low speed high resolution data converters, while TI has focused instead on more expensive high speed high resolution data converters. National is much stronger than TI in the Industrial segment. 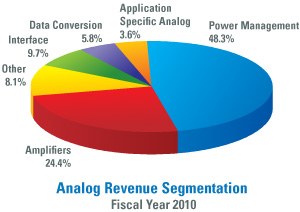 Texas Instruments Revenue
All existing National Semiconductor products will continue to use the same processes and same packages. National products will be free to move to TI's more advanced processes such as TI's new 300mm process technology. Products will be moved to advanced TI product lines only if the cost of re-qualifying the parts makes sense for the new Company and customers.

Sales Force
Texas Instruments has the world's largest semiconductor sales force, ten times that of National's. This provides National with tremendous potential to expand their products into new markets. In the United States, both TI and National share the same two major distributors, Avnet and Arrow. National Semiconductor also has Future, which TI does not share. Each company also sells through a network of smaller local distributors as well as local sales representatives. Who stays and who goes will be driven by whatever is the best choice to drive growth.

Initially, fast sales may be generated by the integration of approved vendor lists (AVLs).

Manufacturing
National Semiconductor's three wafer fabs, located in Maine, Scotland, and Malaysia, will now be operated by Texas Instruments. These fabs operated at a disappointing 58% capacity in the last quarter, down from 68% of the previous quarter.

Editor's Note: This article will be updated as strategic information becomes available. Check back later.

This Article has been seen 13712 times