(June 9, 2008) - Texas Instruments today has announced a new family of 16-bit MSP430 microcontrollers. Labelled the MSP430F5xx family, these new devices run faster than previous versions of the MSP430, sport even more configurable for low power options, and run at an unheard of 160µA/MHz.

Texas Instruments' MSP430 microcontroller family is possibly the lowest power 16-bit RISC microcontroller available today and is miserly in it's approach to using supply current. Based on a proprietary TI core, the MSP430 has a wide range of on-chip options including accurate A/Ds, LCD controllers, and a hardware multiply. The MSP430 is perhaps best known for TI's famous low power demonstrations where a small MSP430 circuit board is powered by only a grapefruit battery. 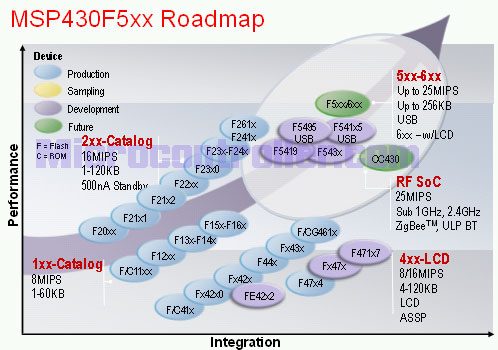 Additional features include a hardware 32x32 multiply, a 4-wire JTAG interface, and integrated pull-up and pull-down resistors on GPIO pins.

Low Power Peripherals
Unused peripherals can be switched off so as to draw no current. Future F5xx devices will include new peripherals such as USB 2.0, an encryption module, and a new LCD interface. New RF transceiver modules are also planned, including ZigBee® and Simplicity transceivers. A new high-resolution timer is planned which can facilitate high resolution digital sampling for applications such as data loggers and voice recognition.

Low Power Memory
Up to 1 MByte of linear memory space is provided. For applications running off of two AAA batteries, read/erase/write of the Flash is possible at voltages down to 1.8V, allowing Flash programming even when the batteries are near end-of-life. The new 5xx family also allows software control of RAM power - RAM sectors that are unused by the user application can be toggled off, a valuable feature for preventing power-hungry RAM from stealing valuable supply current.

Pricing
1ku pricing is detailed in the chart below.

This Article has been seen 22855 times