Feb 19, 2009 -  Zilog today announced the sale for cash of two of their product lines to two buyers. The product lines sold off were their Crimzon® Universal Remote Control product line (including the remote control database) and their Zatara ARM9-based Point-of-Sale (POS) microcontroller product line. Zilog also sold off about 15 patents in this transaction.

Maxim  also purchased Zilog's "Zatara" ARM9-based secure transaction Point-of-Sale (POS) product line. According to Zilog, Maxim required the sale of both business in order for the deal to go through.

The purchase from Zilog of both the 8-bit remote control and the 32-bit POS microcontroller product lines clearly complement Maxim's existing product portfolio and significantly strengthen their positions in these markets.

Dr. Norm Sheridan, Zilog’s experienced Executive Vice President of Technology and Operations and CTO, will be leaving Zilog to join UEI and adds his considerable engineering talents to the care and maintenance of UEI's new remote control and universal infrared (IR) database solution. Norm started with Zilog in April 2000 and immediately began seeing to the technical health of Zilog's Z8 and eZ80 product lines. Under Norm's technical guidance, the quality and performance of Zilog's 8-bit microcontroller product line improved dramatically.

UEI will also be hiring some of Zilog's sales and engineering personnel, including all of Zilog’s personnel located in India.

Details of the Deal
As part of the deal, Zilog agreed to allow employment offers to be extended to 128 departing Zilog employees.

According to Zilog, Maxim and UEI "have cross-licensed technology and intellectual property to one another for purposes of the continued conduct of their respective businesses". It is unclear as to whether or not the license allows UEI to use the purchased assets to produce remote controls using non-Zilog microcontrollers.

According to Zilog, "The purchase price for these assets is approximately $31 million in cash, $3.1 million of which will remain in escrow for up to one year. After giving effect to payments for taxes, professional fees, employee related costs and other transaction costs and after deducting the escrow amount, Zilog will net approximately $22-24 million in net cash proceeds from these transactions. As of March 31, 2009, Zilog expects its ending cash balance (exclusive of the escrow amount) to be between $31-34 million. Zilog's board of directors will first review the revised fiscal year 2010 operations plan prior to the determination of how that cash will be used."

For the first nine months of Zilog's fiscal year which ends in March, the products sold off today brought in $21.1M out of $50 total revenue for the period.  However, Zilog sold these combined assets for just $31M in cash.

Of the $31M Zilog made today, $3M goes to legal, banking, and other transactions associated with this sale. Zilog will keep $3.1M of the sale in escrow. Zilog's reason for the escrow was vague, citing it was there for "unexpected items".

Zilog first introduced their Zatara ARM9-based POS product line in February 2006. But last year, Zilog attempted to "re-launch" the Zatara. The company attempted to aggressively promote the Zatara POS products via a direct sales efort led by Keith Bladen, Zilog's head of marketing. However, Zatara's sales have not met expectations because, according to Zilog CEO Darin Billerbeck, the POS "sector had evolved as we entered it". As a result, Billerbeck claimed that the product line was "becoming more expensive to grow".

Also, the Zilog patents that were sold off are as follows:

These patents were sold for a cash payment of $1 million. The terms and conditions of the sale, as well as the entity they were sold to, are confidential. 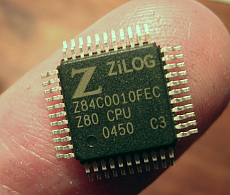 The Original Z80 (as sold today)
Last September, Zilog had a workforce of about 400 employees worldwide. Today, only 135 people still have jobs at Zilog. Billerbeck stated today that Zilog intends to grow their remaining flash microcontroller business. However, with the exit of Dr. Norm Sheridan as head of Engineering, as well as the departure of almost all of Zilog's experienced design engineers, Zilog's present management does not intend to develop any new silicon because they no longer have a design engineering team. Only two or three semiconductor design engineers remain with the company.


When asked about the process of selling off today's assets, Billerbeck complained that as he sought out interested buyers of Zilog IP, "nobody looked at the whole Zilog". Coupled with their recent behavior and rapidly dwindling sales, it's clear that present management's only interest is selling off what remains of this once grand and historic company that invented the Z80 in 1976.

This Article has been seen 19412 times