June 11, 2007 (Microcontroller.com) - A new ARM Cortex-M3 STM32 family has been announced by STMicroelectronics. Based on the ARM Cortex-M3 core, it is similar to the ARM7 programming model except that the Cortex boasts a Harvard architecture.

From a programmer's point of view, STMicroelectronics' implementation of the ARM Cortex does not overlap the instruction and data memory address locations.

At present, the only other significant licensee of the ARM Cortex is Texas Instruments. Luminary Micro of Austin, Texas is also a Cortex licensee; however, Luminary Micro is a startup company with seed funding from ARM, representing ARM's intent to compete with their own licensees and making many major microcontroller manufacturers wary to adopt the Cortex; however, in the words of Carol Brown of ST's U.S. Media Relations, ST expects to compete against Luminary because of "more enticing manufacturing plants". 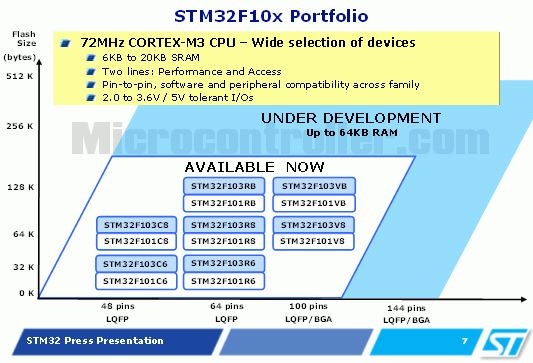 The new ARM Cortex STM32 family boasts a low power rating of 0.5mA/MHz. The STM32 ARM Cortex is available in two product families: the "Performance" line boasts a 72MHz core speed with a 24MHz on-chip Flash speed, while the "Access" line has a 36MHz clock and plenty of peripherals.

Other features of the Cortex STM32 family include: 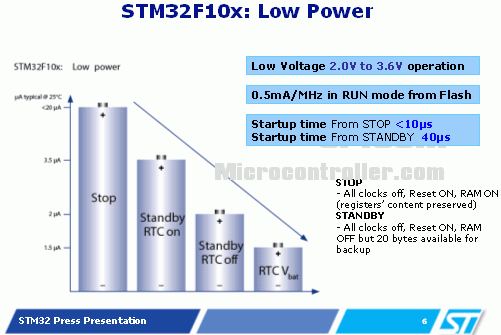 About STMicroelectronics
"With headquarters in Italy, the United States, and France, STMicroelectronics is a global leader in developing and delivering semiconductor solutions across the spectrum of microelectronics applications. An unrivalled combination of silicon and system expertise, manufacturing strength, Intellectual Property (IP) portfolio and strategic partners positions the Company at the forefront of System-on-Chip (SoC) technology and its products play a key role in enabling today's convergence markets. The Company's shares are traded on the New York Stock Exchange, on Euronext Paris and on the Milan Stock Exchange. In 2006, the Company's net revenues were $9.85 billion and net earnings were $782 million."

This Article has been seen 19103 times