New ARM Cortex STM32 Microcontrollers from ST have More of Everything

May 28, 2008 (Microcontroller.com) - STMicroelectronics has announced a significant expansion of their STM32 ARM Cortex product family by adding 22 new devices with new peripherals and increased functionality.

ST's STM32 product family was first introduced in June 2007. ST's latest product family is based upon the ARM Cortex M3. The STM32 demonstrates fundamental advantages over competing Cortex solutions in power consumption and functionality, which is no surprise since ST was a leading developer of the Cortex core for ARM.

In the ARM Cortex Roadmap for the STM32 (see below), new devices are circled in green. 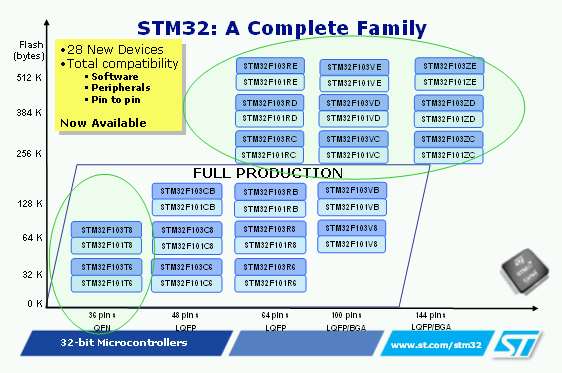 LOW Power (Really!)
The STM32 is fabbed using STMicroelectronics' 0.18µ embedded flash technology process. The STM32 seems a perfect match for this process, as it draws a mere 36mA at 72MHz - that's at full run mode with everything on. According to ST, competing Cortex designs have managed 100mA while running at much less than 72MHz.

In Sleep Mode, the STM32 has the CPU shut down with all peripherals running. The current draw in this mode is 2mA.

Stop mode has the CPU and all peripherals shut down (clocks to peripherals are gated off) with only the real-time clock (RTC) and data RAM powered up. This pulls the current draw down to 14µA. In this mode, the CPU required 7µsec to wake up

Standby is the STM32's most miserly power setting. Everything is turned off except the RTC and a few bytes of backup RAM (20 bytes for the original family, 84 bytes for today's new devices). This drags the current draw down to a scant 2µA to 3.4µA. The sleeping CPU can wake up in 40µsec from standby. 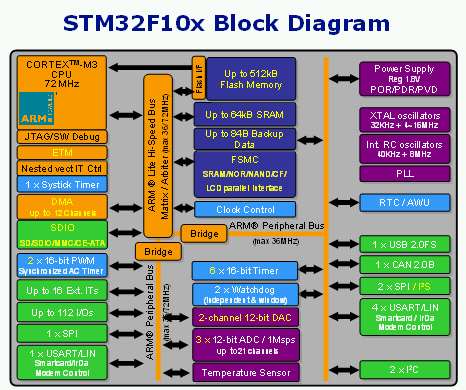 STM32 tools bought through STMicroelectronics (not via 3rd parties) numbers over 16,000 tools worldwide.

Pricing
The new STM32 MCUs in the QFN36 package are in volume production today. Devices with 256 Kbytes and larger Flash memories are currently being sampled. The STM32 family is divided into two groups: the Access Line runs at 36MHz, while the Performance Line has a core speed of 72MHz.

About STMicroelectronics
With headquarters in Italy, the United States, and France, STMicroelectronics is a global leader in developing and delivering semiconductor solutions across the spectrum of microelectronics applications. Significant expertise in silicon and systems, manufacturing technologies, Intellectual Property (IP) portfolio and strategic partners positions the Company at the forefront of System-on-Chip (SoC) technology, and its products play a key role in enabling today's embedded devices. The Company's shares are traded on the New York Stock Exchange, on Euronext Paris and on the Milan Stock Exchange. In 2006, the Company's net revenues were $9.85 billion and net earnings were $782 million.

New ARM Cortex STM32 Microcontrollers from ST have More of Everything

This Article has been seen 27652 times