Ember offers a two-day developer training program, both in-house and on-site at customer locations, tailored to individual customers’ needs. Developers spend half a day in presentations. The balance of the time is hands-on training building sample applications on Ember’s Developer Kit. The Developer Kit is a set of wireless hardware and software tools that enable developers to rapidly create mesh networking applications based on the Institute of Electrical and Electronics Engineers’ (IEEE’s) 802.15.4 standard and Ember’s ZigBee ready EmberNet platform. The Ember platform enables companies to join anything from roads and bridges to industrial machinery into “Internets of things” that provide monitoring data and remote management functionality via low-cost, low-power radio networks. 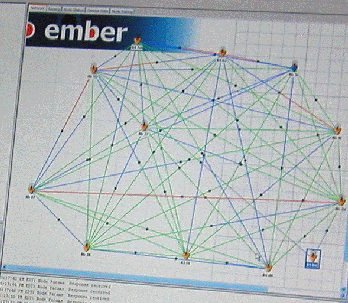 Example of an Ember Zigbee Network
Ember University enables developers to begin building wireless monitoring and control applications on the Ember platform immediately. Instruction goes beyond product tutorials to give engineers and application developers a head start in applying wireless mesh networking to real-world business problems: its promising application areas, pitfalls to avoid, and how to realize the technology’s full potential. Ember University is a key element in the Ember solution set, which includes training, a network of technology partners, and a full line of low-power integrated semiconductors that combine RF (radio frequency) baseband and microcontroller functionality.

"I can say with full sincerity that Ember University is one of the best and most useful training courses I have ever done," said Calvin Stanfield of Roke Manor Research, a UK-based developers of wireless sensor and communications networks.

Companies embed Ember networking intelligence in low-cost sensor modules that perform a wide range of tasks, including managing buildings’ energy consumption; tracking perishable cargo’s freshness; and monitoring the wear and tear on transportation infrastructure such as roads and bridges. Ember customer and technology partners include companies such as Honeywell, RAE Systems, Sensitech, Xsilogy, and Philips Lighting.

This Article has been seen 11944 times