The Freescale RS08 is a simplified version of the HCS08 core. The core on these 6-pin and 8-pin devices is the size of a grain of pepper. 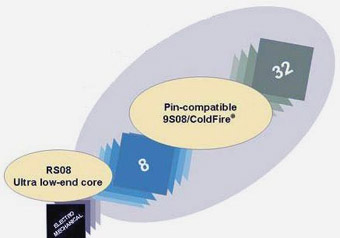 The low cost Freescale RS08 ultra-low-end core is a simplified version of its higher-performance HCS08 architecture. The core is 30 percent smaller and features a condensed instruction set, allowing compact and efficient coding of most embedded applications in small-pin-count devices with less than 16K of flash memory.

The Freescale RS08 core is 30% smaller than the S08 core. Differences between the RS08 and the S08 core include: 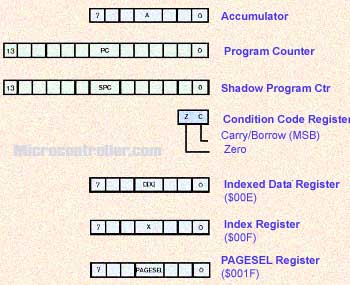 Freescale RS08 Core Registers
Freescale is also developing a new version of the CodeWarrior™ Development Studio to support the RS08 core. The RS08 is the starting point of Freescale's new performance roadmap that will provide completely compatible peripherals and tools from 8- to 32-bit.

"We have focused on providing 8-bit solutions that are an easy-to-use alternative to simple logic," said Mike McCourt, Vice President and General Manager of Freescale’s Microcontroller Division. "We are surrounding the silicon with a support environment that delivers the training, tools and software that will help accelerate our customers’ time to revenue."

The RS08 uses the same internal bus structure as the HCS08, which allows integration of HCS08 peripherals, memory, and debug hardware.

Freescale plans to introduce the first family of RS08-based microcontrollers in the Spring of 2006. Preliminary pricing starts at under 50¢ (USD) resale.

About Freescale Semiconductor
Freescale Semiconductor, Inc. (formerly known as Motorola Semiconductor) is a global leader in the design and manufacture of embedded semiconductors for the automotive, consumer, industrial, networking and wireless markets. Freescale became a publicly traded company in July 2004 after more than 50 years as part of Motorola, Inc. The company is based in Austin, Texas, and has design, research and development, manufacturing or sales operations in more than 30 countries. Freescale, a member of the S&P 500®, is one of the world’s largest semiconductor companies with 2005 sales of $5.8 billion (USD)

This Article has been seen 18268 times