New Freescale S21XE 16-bit Flash microcontrollers have 1MByte of Flash at 50MHz, 5 CAN interfaces, 8 LIN interfaces, 2 SPIs... you get the picture? 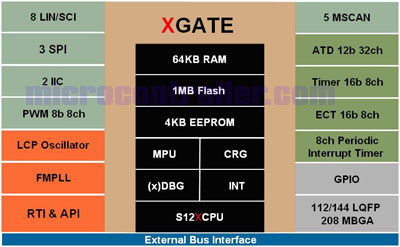 Freescale 12XEP100
The first device in this new product family, the S12XEP100, has 1MByte of flash memory, twice that of the present S12X product range.

Based on Freescale's 16-bit HCS12 product line (previously known as the 68HC12), the S12XE family's 0.18 micron process provides for a more efficient use of die space, allowing the addition of more memory to be cost-efficieint.

The new S12XE family includes a memory protection unit (MPU), which allows areas of memory to be protected from being over-written by unauthorized program routines. This not only helps minimize system failures within the automobile, it helps prevent unauthorized software patching of the firmware.

"System integrity in the product range reaches new levels with the introduction of self-correcting flash memory and a new MPU," noted Kevin Klein, Automotive Product Marketing Manager for Freescale's 16&32-bit MCUs. "The MPU is a particularly sought-after feature for today's market, where it is increasingly common for MCU software modules to be supplied by multiple vendors."

The S12XE family features the XGATE co-processor timer module, which is used to offload the main processor by managing functions such as complex PWM, LCD driving, and interrupt handling.

The Freescale MC9S12XE features include:

Development Tools
Third-party hardware and software tools are available. A listing was not available at press time. According to Freescale, existing HCS12 tools are compatible with the S12XE.

Product Availability
The 1MByte S12XEP100 is sampling now. An array of development tools including evaluation boards and C-compilers is also expected to be available later this month.

About Freescale Semiconductor
Freescale Semiconductor, Inc. (NYSE:FSL) (NYSE:FSL.B) is a global leader in the design and manufacture of embedded semiconductors for the automotive, consumer, industrial, networking and wireless markets. Freescale became a publicly traded company in July 2004 after more than 50 years as part of Motorola, Inc. The company is based in Austin, Texas, and has design, research and development, manufacturing or sales operations in more than 30 countries. Freescale, a member of the S&P 500(R), is one of the world's largest semiconductor companies with 2005 sales of $5.8 billion (USD).

This Article has been seen 16637 times