Infineon Technology announced the resignation of Andreas von Zitzewitz over charges of bribery and corruption. !NO-SPIN! 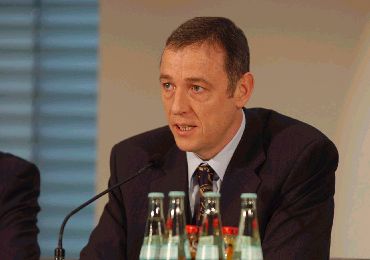 Andreas von Zitzewitz in a Nov 2003 Press Conference
Dr. Zitzewitz has been with Infineon since 1986 and holds a Doctorate in Electrical Engineering.

Dr. Zitzewitz, along with former Infineon manager Harald Eggers, are accused of accepting a series of bribes and kickbacks over three years totaling 259,000 euros ($313,200).

Schmidt-Sommerfeld, a spokesman for German authorities, said they were tipped off by Udo Schneider, managing director of BF Consulting GmbH who was testifying on allegations of corruption involving Infineon.

In 2003, citing poor performance attributed to a mishandling of the American microcontroller marketplace, Infineon laid off many American employees and dramatically reduced staff at their U.S. headquarters in San Jose. Infineon's Microcontroller division had suffered under former Director Geoff Lees (who later became G.M. of Microcontrollers at NXP Semiconductors), who some say was forced to resign under allegations of gross mismanagement, wrongful terminations, and repeated employee irregularities.

Infineon Technology presently is not under investigation for this scandal, and is fully cooperating with German authorities.

Infineon Technology successfully spun off from it's former parent, Siemens AG, in 1999.

This Article has been seen 17664 times