Chandler, AZ (March 10, 2003) - MetaLink Corporation has introduced support for the DS80C400 Network Microcontroller from Dallas Semiconductor/Maxim. The 8-bit DS80C400 MCU is based on an improved version of the Dallas' High Speed 80C51 core architecture, which includes a flat 16 Mbyte address space.  This communications intensive microcontroller includes a 10/100 Ethernet MAC, three serial ports, a CAN 2.0B controller, 1-Wire Master and 64 I/O pins.  An on-chip ROM supports a network boot capability (Ethernet or serial), implements UDP, TCP, DHCP, ICMP and IGMP and provides a TCP IPv4/IPv6 network stack.  The ROM also includes a preemptive, priority-based task scheduler to simplify multi-channel communications applications.  Support for the DS80C400 device will be provided by the MetaICE-XF family of emulators at $4000. MetaLink is now accepting orders. Delivery is two weeks ARO. 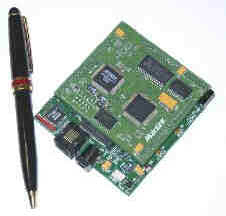 The MetaICE-XF 8051 emulator features a small footprint with high speed and attractive features for a modest cost, providing a great value. The MetaICE-XF is one of the smallest full-featured emulators on the market, measuring just 3.3" (8,4 cm) by 3.0" (7,6 cm). The DS400 MetaICE-XF emulator includes the following standard features:

The SFR Write Data is a unique feature of the MetaLink emulator.  This feature captures in the emulator's trace memory every direct data write to an SFR (Special Function Register) in real time.  It provides unparalleled visibility into the internal data flow of the program's execution, which significantly enhances the debug capabilities of the emulator and the productivity of the engineer.

The DS80C400 contains Enhanced Hooks, a MetaLink patented emulation technology licensed to Dallas Semiconductor.  Many of the DS400 MetaICE-XF emulator's unique and powerful characteristics are a result of Enhanced Hooks being embedded in the DS80C400 microcontroller.

About Metalink
MetaLink Corporation is a leading manufacturer of high-quality, high-performance, cost-effective in-circuit emulators for embedded control designs. Founded in 1984, the company has many significant achievements in in-circuit emulator technology, including the invention and widespread adaptation of Enhanced Hooks, a patented technology that eliminated the need for bond-out chips for most 8051 devices. Enhanced Hooks has been licensed by most major 8051 semiconductor companies.

This Article has been seen 13650 times