What does "product end of life" mean to you?

Well, if you're an astronaut in the International Space Station (ISS), and you've got an out of date spacesuit, it's an opportunity to have a little fun.

Unlike some systems, equipment used on the Space Station isn't left around until failure - especially something as life-critical as a spacesuit. So, engineers at NASA got together with Applications Engineers at Microchip and SuitSat-1 was born.

Yes, SuitSat-1. On February 3 2006, NASA, in cooperation with Microchip Technology, pushed an end-of-life Orlan spacesuit out the pod bay door... uh, I mean the ISS airlock - and let it gently float in Earth's orbit.  But first, they added a few cool attachments.

See, a year before the launch of SuitSat-1, Steve Bible, an Applications Engineer at Microchip Technology, got a call from his old friend and retired NASA engineer Lou McFidan. Lou explained to Steve that a Russian Orlan spacesuit on the ISS had reached it's operational end-of-life in Feb 2004, and the fellas at NASA were throwing around a few ideas about what they could do to have some fun with the spacesuit. One of the ideas being seriously considered was just throwing the suit out - out of an airlock - with a radio and some sensors to record items like the suit's temperature, the battery voltage, and the mission elapsed time. It was agreed that some sort of embedded systems board would be needed to manage and control the data.

And so, when Lou at NASA asked his friend Steve at Microchip, "Can a PIC microcontroller be used for this application?", Steve replied with a resounding, "Yes!". 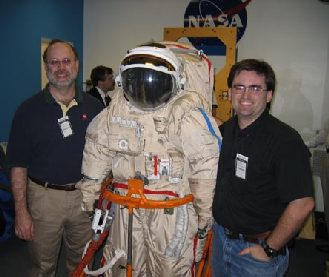 l. to r: Steve Bible, SuitSat-1, Joe Julicher
Steve recruited another Microchip veteran, Principle Applications Engineer Joe Julicher, to assist in the development of the SuitSat controller board. The controller board uses a Microchip PIC18F8722 microcontroller, MCP9800 temperature sensor, and MCP6022 opamps.  Voice messages from children around the world were digitized and placed in the microcontroller's Flash memory, and the sounds transmitted over amateur radio.  The controller also calls out telemetry using a digitized voice encoded in ADPCM that voices the suit's temperature, battery voltage, and mission elapsed time. The PIC18's ECCPWM timer module is responsible for synthesizing the encoded data into audio, which is then fed to the radio. Students all over the world can listen to these greetings from space using a simple amateur FM radio tuned to 145.990 MHz. 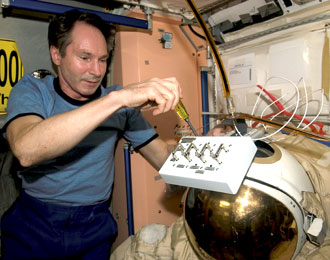 While Steve and Joe could not radiation harden the electronics, they did test the controller board in it's die cast aluminum box down to a chilling -40°C. As you will see in the photo, all the electronics fit inside the Suit with a switch box and antenna fitted to the helmet (at no time was the phrase "Borg implants" used). Exposed to the fierce rays of the sun, the suit's environmental controls are turned off to conserve battery power.

The controller PCB and switch box were designed and assembled at Microchip.  The radio and antenna was designed and developed by volunteers in Florida.  The complete SuitSat Flight integration was completed at Microchip's laboratory in Arizona in June.  Two complete flight units were delivered to NASA in Houston Texas, USA and then were shipped to Russia.  There it underwent certification testing and final flight integration.

SuitSat transmits for 30 seconds, pauses for 30 seconds, and then repeats. "This is SuitSat-1, RS0RS" the transmission begins, followed by prerecorded greetings in five languages. The greeting contains "special words" in English, French, Japanese, Russian, German and Spanish for students to record and decipher. Awards will be given to students who successfully decipher the message.

The lifespan for the suit's three batteries was estimated to be at least three days. The orbit is expected to decay after 3-6 weeks after which the suit should safely burn up in the atmosphere.

(editor's note: while SuitSat's three batteries were expected to be good for three days from it's Feb 3rd launch, at the time of this article SuitSat is still dutifully transmitting it's signal)

This Article has been seen 42998 times