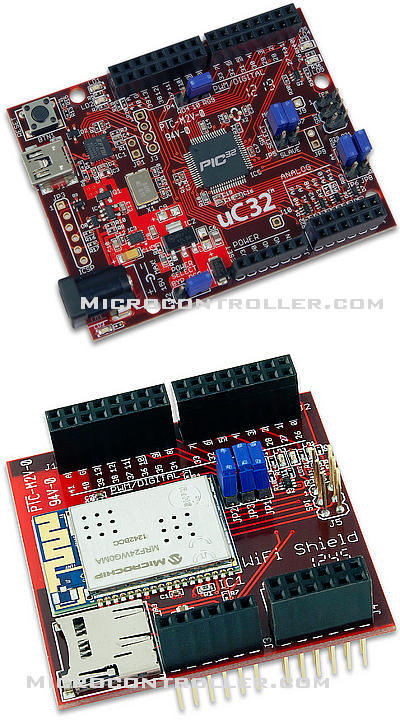 New Arduino boards, chipKIT on top, WiFi board on bottom
What is Arduino?
Arduino® is an open-source electronics prototyping platform based on flexible, easy-to-use hardware and software. Boards are programmed using the Arduino language, an easy to learn macro language that is simpler than C.

Digilent’s chipKIT uC32 development board has the same form factor as their chipKIT Uno32 board, with the addition of larger memory (512 KB Flash and up to 32 KB RAM).  The uC32 board provides a single, general-purpose development platform for users to create a wide range of 32-bit MCU-based applications using the free, Arduino compatible chipKIT IDE-called the Multi-Platform IDE, or MPIDE.  Digilent’s chipKIT Wi-Fi Shield enables users to implement wireless projects with the chipKIT line of microcontroller boards, such as the new uC32, or existing Uno32 and Max32 boards.

Introduced in May 2011, the Microchip PIC32 MCU-based chipKIT Platforms have enabled hobbyists and academics to easily and inexpensively add electronics to their projects, even if they don’t have an engineering background.  The chipKIT uC32 board includes Microchip’s PIC32MX340F512H microcontroller, featuring 105 DMIPS performance, 512 KB Flash, 32 KB SRAM and 42 I/O pins that support a number of peripheral functions, such as UART, SPI and I2C ports and pulse-width-modulated outputs.  Twelve of the PIC32’s I/O pins can be used as analog inputs or as digital inputs and outputs.

Digilent’s chipKIT Wi-Fi Shield makes use of Microchip’s agency-certified MRF24WB0MA Wi-Fi module, and provides chipKIT microcontroller boards with the ability to communicate via IEEE 802.11 compatible wireless networks.  The Wi-Fi Shield also provides a microSD card connector for use with microSD Flash memory cards.  The chipKIT MPIDE SD library can be used to read/write files stored on the microSD card.

"We’re very impressed with the quality and utility of the latest chipKIT development boards from Digilent, and with the robust application libraries they provide for the user community", said Derek Carlson, Microchip’s vice president of Development Tools.

"The growing popularity of our chipKIT line drives us to create more state-of-the-art products for people, with or without electronic-engineering backgrounds, to easily integrate electronics into their projects", said Clint Cole, president of Digilent, Inc.  "The addition of our chipKIT uC32 and Wi-Fi Shield lets users build a wide range of embedded-system projects with Wi-Fi functionality."

The MPIDE also makes it easy for new developers to introduce their own compatible chipKIT boards.  The MPIDE includes libraries, such as Brian Schmalz’s SoftPWMServo library, which enables users to generate an analogWrite-style output, as well as an RC Servo output, on all pins simultaneously.

This Article has been seen 21727 times