Look! Up in the Sky! Its an Autonomous Vehicle!

Where do you find leading-edge autonomous vehicle technology? Hint: It may not be at Tesla.

Military applications for autonomous vehicles are the most advanced self-driving vehicles. The conditions and restrictions for the military are unforgiving, and epitomize the maxim "failure is not an option". It's expected that the military autonomous vehicle innovators of today will be the ones responsible for tomorrow's successes on our highways.

The military is often, very quietly, on the leading edge of many exciting technologies. A curious example is the story of one of the very first drone helicopters, the Navy QH-50C DASH which first flew back in 1961. 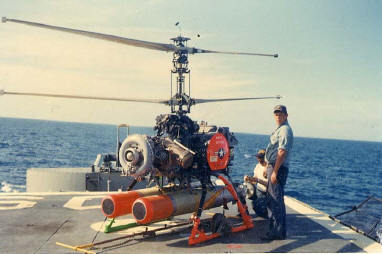 In the wake of WWII, the United States Navy was looking to extend the capabilities of their durable Gearing-class destroyers. The visionaries at Gyrodyne Helicopters approached the Navy with the unique idea of building remote-controlled unmanned helicopters that could be launched and recovered off small ships. These Volkswagen Beetle-size drones could be remotely flown by a ship-based pilot, who sat on the deck of the ship at sea while manning the operating console. This pilot had the seemingly impossible job of operating the controls while sitting on deck with the only means of feedback being constant visual contact with the flying drone miles away. Losing sight of the drone meant losing control. Modern video games are easier than this!

The DASH was kept in the air by two helicopter rotors stacked on top of each other, rotating in opposite directions. To many observers this strange coaxial rotor configuration looked like something from out of science-fiction, but it quickly gained acceptance and its influence can be seen on many commercial drones today. Always looking to improve, in 1965 Gyrodyne began a field upgrade of existing DASH drones with a TV camera for better surveillance and operability. These upgraded DASH drones, codenamed "Snoopy", allowed the ship's captain for the first time to view live-action "over the horizon" video. This greatly enhanced the ship's capabilities while keeping sailors safe. Later field upgrades included increased range, better maneuverability, and a night camera, all of which resulted in more flexibility in mission profiles.

The DASH drone program was so successful it allowed the U.S. Navy and its allies to extended the life of Gearing-class destroyers well past their originally intended lifespan.

Fast forward to the exciting advances of today, as every day new technology companies race to offer the military even more advanced technologies that enhance autonomous vehicles while safeguarding troops and equipment in the field. Robots can even improve morale by separating soldiers from dull, dirty, and dangerous tasks. Autonomous military vehicles now include airborne drones of many sizes, ground vehicles of every type, self-driving ships, robot submarines, and possibly many more not known to the public.

The modern Northrop Grumman MQ-8 Fire Scout series of autonomous helicopters are direct descendants of the original DASH drones. Although the MQ-8B Fire Scout is similar in size to the QH-50C DASH, that is where the similarities end. Unlike the DASH, the Fire Scout can take off, carry out an entire assignment, and land itself without any human control. Mission profiles are greatly expanded and include safely carrying food, equipment, and medical supplies under situations too hazardous for a human pilot. The Fire Scout can be quickly reconfigured in the field with modular payloads and scalable sensors that are almost plug-n-play. 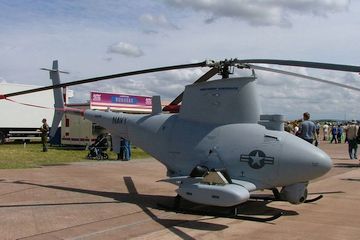 Northrop Grumman MQ-8B Fire Scout Autonomous Helicopter
The technology content of military autonomous vehicles like the Fire Scout is staggering. It includes leading-edge high precision GPS systems along with LiDAR (Light Detection and Range) for highly accurate ground ranging and distancing. Ruggedized camera systems absolutely must have the best depth of field resolution. Advanced on-board sensor systems maintain vehicle flight status and act as a backup in the event of hostile GPS jamming. Search radar systems can conduct autonomous search and rescue missions on land or sea while sophisticated Artificial Intelligence (AI) algorithms can tell the difference between algae and a life preserver. Encrypted unit-to-base communications are resistant to interference and can maintain a solid connection from launch to recovery.

All of this is controlled by cutting-edge software and firmware, integrated with the latest in AI. Each of these systems is required to be at or near cutting-edge and is constantly updated.

It's an old saying but it's true that the only constant in military technology is change. Like the DASH, military contractors and subcontractors are always pushing the envelope to obsolete last year's technology. That's why Engineers are busy constantly improving these systems, writing new code and building better hardware for the next time a technician updates these systems in the field. Companies spending their time improving these technologies often find new opportunities as suppliers to military customers.

It used to be said that the automotive segment drove quality improvement in semiconductors, and computer applications drove miniaturization. Now, for leading-edge autonomous vehicle technology, look to the suppliers of military systems. Robotics and Autonomous Systems (RAS) are considered an essential disruptive strategy and is being deployed across all aspects of military operations. The U.S. Army is accelerating efforts to implement RAS and is vigorously seeking out innovators in this field.

If you want to learn more about what the military's plans are for autonomous vehicle technology, go visit the Robotics and Autonomous Systems Summit from June 25-27 2018 in Detroit, MI.

Look! Up in the Sky! Its an Autonomous Vehicle!

This Article has been seen 8646 times