Rabbit has introduced the Rabbit 4000 microprocessor, with 500 new instructions and connectivity enhancements. Impresssive, most impressive!

Davis, CA – Rabbit Semiconductor, Inc. has announced the Rabbit 4000 as the newest addition to their line of low-EMI microprocessors.

The Rabbit 4000, like its predecessors, is designed specifically for embedded control, communications, and Ethernet connectivity. Rabbit 4000 brings forth new and improved features which make it a clear choice for today’s demanding embedded applications. 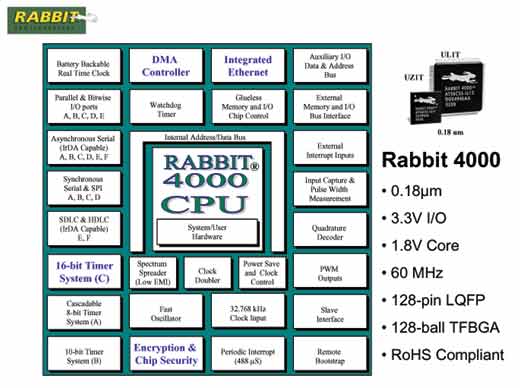 Programming the Rabbit 4000 microprocessor is simple with the industry-proven Dynamic C® software development system. In addition, Rabbit developers do not need costly in-circuit emulators — programming is accomplished simply by connecting an interface cable from a PC to a Rabbit-based target system. Software development and debugging can be performed over Ethernet/Internet using appropriate accessory hardware or RabbitSys. Integrated features of the Rabbit 4000 allow embedded engineers to develop smaller designs, enabling for diverse implementation.

This Article has been seen 18744 times