This is not as straightforward as it appears. Will Captain Tuttle please report to Colonel Henry Blake?

Silicon Labs has announced their intention to acquire microcontroller company Energy Micro, based in Oslo, Norway for $170 Million.

The Silicon Labs Cortex-M3 microcontroller product line is probably the lowest power Cortex-M3 in the industry. Their Precision32 Cortex-M3 family has a sleep current of only 85nA with 4KB RAM active. 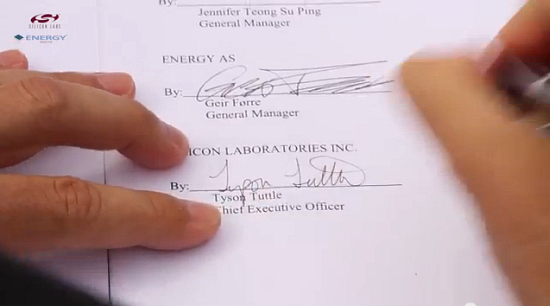 Tyson Tuttle is no relation to Captain Jonathan Tuttle.
Silicon Labs has an extensive portfolio of mixed-signal microcontrollers. External analog signals are processed by high accuracy ADCs and DACs and the actual analog processing is done on-chip using DSP technology.

While Energy Micro's Gecko product line has had an extensive marketing focus on "low power" Cortex-M4, Cortex-M3, and Cortex-M0+, they have had a tough time competing with similar offerings from Silicon Labs, Microchip, and STMicroelectronics.

Energy Micro and their 85 employees will continue to operate as a separate Silabs business unit based out of Norway.

Analysis
Silicon Labs annual microcontroller sales for 2011 was around $250 Million. Energy Micro sales is roughly estimated to be $10 Million for 2013.

The purchase of Energy Micro for $170 Million appears to be a lot for a $10 Million product line; in contrast, Zilog recently made the shrewd purchase of a $337 Million microcontroller product line from Samsung Electronics for $50 Million.

The purchase allows Silicon Labs to quickly and dramatically increase their microcontroller portfolio. Applying their design methods to the Energy Micro Gecko family will allow these microcontrollers to finally see the low power numbers they have dreamed of. In addition, the benefit of Silab's sales channels can result in significantly increased revenues. This, then, may be the real benefit.

Financial Stuff
"Under the agreement, the shareholders of Energy Micro will receive an up-front payment of $115 million in cash, plus approximately $55 million in deferred and earn-out consideration. The acquisition is being funded from balance sheet cash resources and will require no borrowing. Energy Micro is expected to contribute approximately $7 million in revenue in the second half of 2013. Anticipated growth is expected to allow the transaction to be accretive on a non-GAAP basis by the end of 2014. The boards of each company have approved the acquisition, which awaits the satisfaction of customary closing conditions. The deal is expected to close in July 2013. Additional financial details and guidance will be provided in the Silicon Labs’ second quarter earnings call planned for July 25, 2013."

This Article has been seen 23882 times