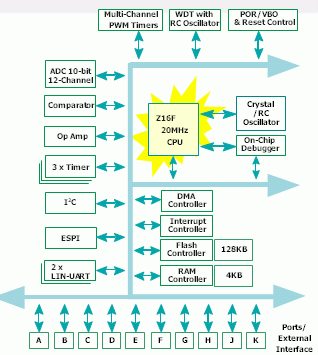 Zilog ZNEO Block Diagram
Robin Abrams, ZiLOG's interim CEO, had this to say about the ZNEO: "ZNEO addresses the significant market demand for a full-featured, 16-bit solution providing up to 128KB Flash memory and more processing power, as well as a migration option with higher code density for our existing Z8 Encore! base. We are already working with several customers on security and high end motor control applications with ZNEO, providing a cost-competitive, single device System-on-Chip (SOC) option which, in motor control applications for example, can not only run the motor but control other functions of the product such as the display, keypad and other user interfaces, negating the need for additional MCUs and lowering overall bill of materials."

Key features of the first members of the Zilog ZNEO Z16F product family include:

About Zilog, Inc.
Founded in 1974, Zilog won international acclaim for designing one of the first architectures in the microprocessors and microcontrollers industry. Today, Zilog is a leading global supplier of 8-bit micro logic devices. It designs, manufactures and markets a broad portfolio of devices for embedded control and communication applications used in consumer electronics, home appliances, security systems, point of sales terminals, personal computer peripherals, as well as industrial and automotive applications. ZiLOG is headquartered in San Jose, California, and employs approximately 500 people worldwide with sales offices throughout Asia, Europe and North America.

This Article has been seen 25074 times